Have you ever stood underneath something and looked at what holds it up?

Yesterday, we went to a creek we’ve been to a billion times. After we played and took some pictures, I found myself standing beneath the bridge.

What an amazing concept! A structure designed to get you from one side to another.

Without it, cars certainly could not cross there. The banks on both sides are too steep and some storm-filled days cause the gentle creek to turn into a rolling one.

If you read my post a few days ago,  you know that we had our safety foundations rattled on Monday.

A few days have passed now, and the fear has subsided somewhat. Now I’m at the point where I can start pulling the lessons out of it.

What happened kind of reminds me of a frigid winter morning. Picture a sun-filled sky, a layer of snow on the ground, and frost on the steps.

It looks nice enough, right? After a few steps across the yard and around the corner of the house,  the wind appears out of nowhere and slaps the face, sending one running for a scarf.

So what have I learned?

My family, friends, blogging friends, and Facebook friends have held me up on tiptoes this week.

Thank you for that. It means so much.  Truly, you are a pillar of strength. 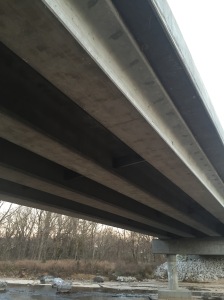 12 thoughts on “Pillar of Strength ”