Have you ever noticed how sometimes the weeks seem to grab on to the wind’s coat tails?

And, how sometimes , time itself is in a race to see how fast it can reach that last day of the month?

That’s how I’ve felt since October. Some days I wake up scratching my head, wondering where the moments have gone.

Simply put, we’ve been busy. Ugh. Now there’s a word with mixed meanings. If you’ve got nothing to do, busy seems like a dream come true.

But, if you’re stuck underneath a giant to-do list, busy is the last thing you want to be.

That’s where we’ve set up camp. Running here, running there, doing this, doing that. Gone ALL THE TIME. While the reasons behind all that doing are good, all that doing is wearing us out.

Ten days ago, we took a break and went to my parent’s house for a week. It was nice. Our “have to be somewhere schedule” came to a screeching halt. I’ve gotta be honest here, it was freeing.

One evening we took a drive and ended up in a little bitty town. Like small. Super small. It was quite obvious it’s days of busy were long gone.

The streets were literally gravel roads and as we made our way around the blocks, I noticed many of the houses looked like they were ten steps past abandoned.

The storefront windows were empty and dark. The railroad tracks seemed lonely. Instead of hearing the constant chatter of train whistles blaring, there was only silence.

The grain elevator stood tall as it braced itself against the sunset. I bet if such structures were given name tags, it would wear “Stately” quite well.

Although this might sound contrary, being there filled my heart with a sense of peace. I mean, can you imagine the town in it’s day?

It was probably robust and bustling with families running here and there. Merchants getting their goods and setting up shop. Farmers raising crops and bringing them to town to sell.

The church pews were probably crammed packed on Sunday mornings and during the week, the school desks probably held elbows on top and legs dangling below them.

Being there that day was so refreshing. It was almost like we flipped back the calendar years, stepped right into days gone by, and for the first time in two months, actually had a chance to just slow down. 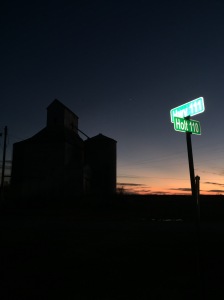 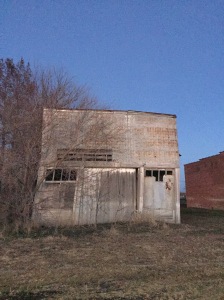 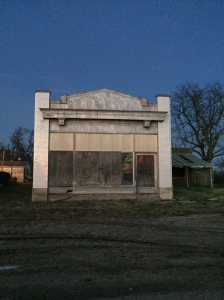 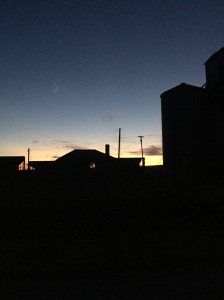 34 thoughts on “Just Slow Down”