Today Little Bit and I had some extra time, so we stopped at the United States National Military Cemetery.

According to the sign, it was established in 1867. There are 1,521 interments and of those, 832 are known. My heart ached when I read the bottom line:

Believe it or not, as far as cemeteries go, it is an extraordinarily beautiful place. Rows and rows of white headstones dress up winter’s grass like a skirt that never ends. An old stone wall with a castle-type appearance, almost seems to stand guard over those who’ve passed on.

Even though it was a bit chilly, the sun made its grand entrance after nearly 10 days of gray skies. Seeing it was so welcoming that I actually forgot I was cold.

What a great day to be there. I felt so honored to be among all those heroes. 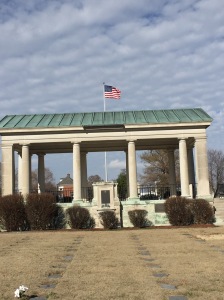 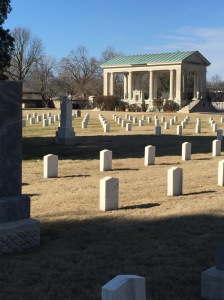